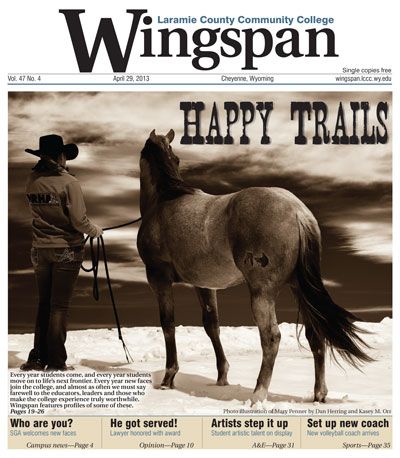 The cover of the April 29, 2013, issue by Dan Herring and Kasey M. Orr was called “Happy Trails” and showed a horse and rider looking at the horizon after a spring snowstorm. At the time Herring was editor of Wingspan Online, and Orr was co-editor of Wingspan.

The image won first place in Region IX, which consists of Wyoming, Colorado, Utah and New Mexico, making it eligible for the national competition against two- and four-year colleges and universities with less than 10,000 enrollment.

In March, Wingspan was named “best all-around nondaily student newspaper” in the small college category in SPJ Region IX. Students working on the publication captured other regional awards, more than twice as many as any other small college or university:

The Society of Professional Journalists is the nation’s most broad-based journalism organization, dedicated to encouraging the free practice of journalism and stimulating high standards of ethical behavior. Founded in 1909, SPJ promotes the free flow of information vital to a well-informed citizenry; works to inspire and educate the next generation of journalists; and protects First Amendment guarantees of freedom of speech and press.