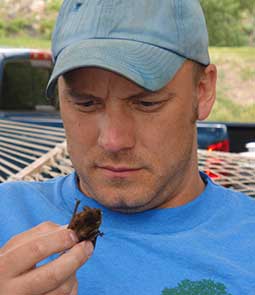 Zac has been a biology instructor, laboratory manager and research mentor at Laramie County Community College since 2012.

Zac received his B.S. in fisheries and wildlife from the University of Nebraska–Lincoln, and then stayed at UNL to get a M.S. in Natural Resources Science and a M.S. in Museum Studies. He then moved to Oklahoma State University and received his Ph.D in Zoology.

A self-described "grass hugger," Zac grew up in Nebraska and has spent most of his life on the prairie. It is in the landscapes of Colorado, Nebraska, Oklahoma, and Wyoming through biking, birding, camping, hiking, and conducting research where he developed a passion for biology, and enjoys sharing this passion through education.

Although his favorite beasties are bats (Chiroptera) and shrews (Soricidae), he is interested in all organisms, and has been involved in natural history, conservation, ecological and molecular research on many organisms (rodents, carnivores, herps, insects, plants, fungi, protists). Lately he has returned to an interest in parasites and the coevolution of these organisms and their hosts.

In his free time Zac enjoys traveling, birding, hiking, camping, music and movies with his wife and 4-legged kids (dog, cat, and degu).