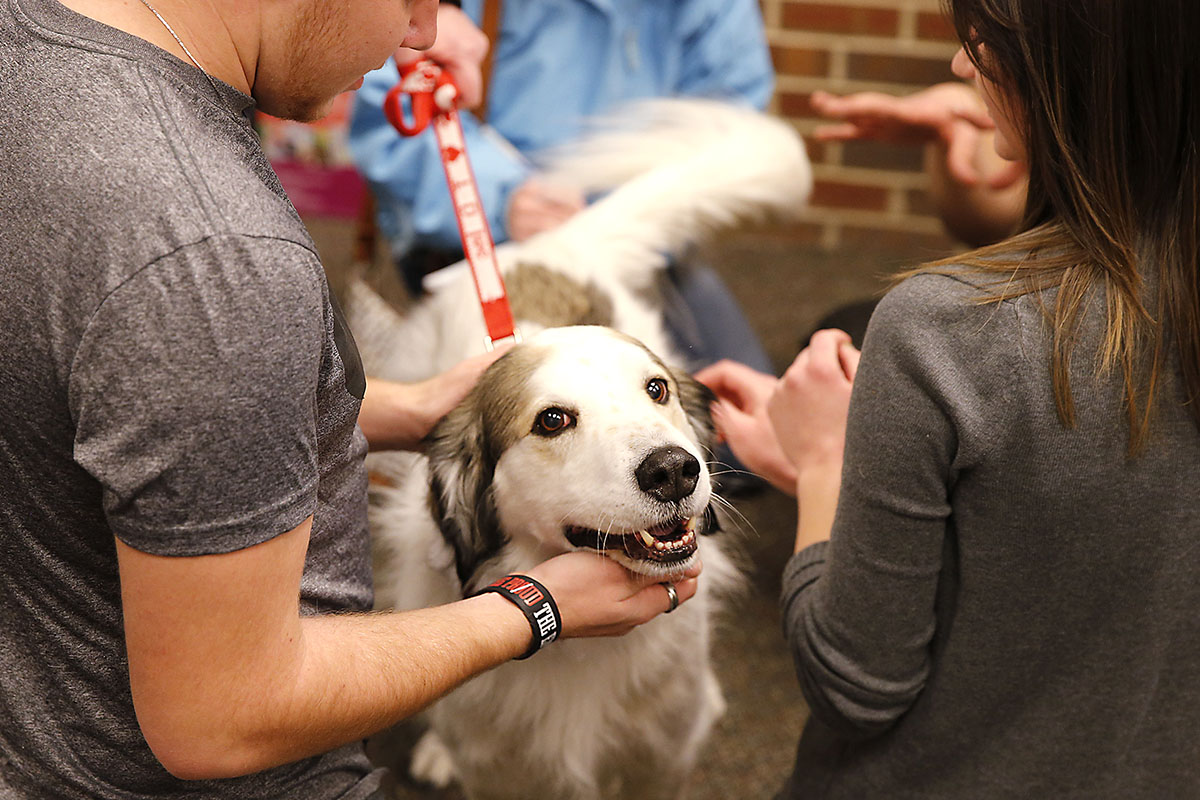 Students gather around a therapy dog named Hank during a visit to help students relax for finals at the Laramie County Community College dorms. Michael Smith/LCCC

As soon as the student saw Hank sitting there, she walked over, sat down and hugged him.

As she spoke softly to Hank while caressing his head, time seemed to stand still for the Laramie County Community College student and the Pyrenees-mix dog.

Along with four other dogs and their owners, Hank and Stacy Shultz-Bisset were at LCCC recently during finals week as part of a therapy dog visit to help students relax and de-stress.

The visit helped students take a break from their hectic studying schedules to decompress with man’s best friend. Besides the therapy dogs, the relaxation event included coloring for adults and a guided meditation session with LCCC counselor Mindy Falkner.

“With finals week, people are going through a lot of stress,” said Meghan O’Brien, resident advisor, who organized the relaxation event at the residence hall. “I organized this event as a way to help students de-stress. The dogs are amazing. A lot of people are saying ‘wow, I haven’t seen a dog in forever.’ Some of our students are so far away from home, and having dogs here for this event is amazing.”

It didn’t take long for Hank and the other dogs to become the life of the party. The other dogs were Haven, a Doberman Pinscher owned by Billie Smith; Izzie, a Brussels Griffon owned by Jean Rawles; Annie, a black Lab/Australian Shepherd/Poodle mix owned by John Lavery; and Milo, an Australian shepherd mix owned by Jody McMullan.

Each dog sat patiently waiting for attention from the students. Some played with toys, making the students smile, while others listened as the students spoke to them softly, taking in each word they said.

“We typically come out during finals week to help the students de-stress,” said Smith, who is executive director of Alliance of Therapy Dogs, a national agency consisting of 15,000 members. “There are a lot of statistics that show dogs are good stress relievers, and they lower anxiety and blood pressure.”

Smith’s dog Haven, who is deaf, had the chance to greet everyone who visited. Whenever someone approached, the dog would put her head on their outreached hand to provide comfort.

The members of Alliance of Therapy Dogs in Cheyenne not only visit LCCC during the year, but they also stop by the local schools where books are read to the children and the dogs; and they visit nursing homes to see residents.

“It’s so rewarding to do this,” Shultz-Bisset said, who has been with the Alliance of Therapy Dogs for 14 years. “Sometimes in the nursing homes, we’re the only people they see. When we do visits, the people we meet often tell us how they miss their own dogs.”

Hank is relatively new to the program, having been certified as a therapy dog a few months ago. But Shultz-Bisset has had several therapy dogs including Gretchen, a Newfoundland Lab mix; Hannabell, a Great Pyrenees; and most recently Carma and Bebe, two Newfoundlands.

Rawles, Lavery and McMullan said they were happy their dogs could attend and bring some comfort to the students. Each of their dogs drew a crowd of students, who waited patiently for their chance to get some comfort.

“I think we all like doing this, because it brings them comfort when they’re away from their families,” McMullan said. “Having our dogs visit them helps create a sense of normalcy.”

During the visit, the students were all smiles and showed signs of relaxation. They sat on the couches in the room, talking to each other and laughing while enjoying the company of their new four-legged furry friends.

“I have four dogs at home, and they’re very important to me,” said Camilo Suarez, who came from Connecticut to study at LCCC. “This is a really nice event, because you get to spend some time with the dogs and take a break from studying.”

“Events like this bring people together and help create connections,” he said. “I don’t think anything connects people like a dog. When you have dogs like this, who can be stressed out? It helps take my mind off things and gives me a moment of peace.”

For more information about the Alliance of Therapy Dogs, visit the organization’s Web page.